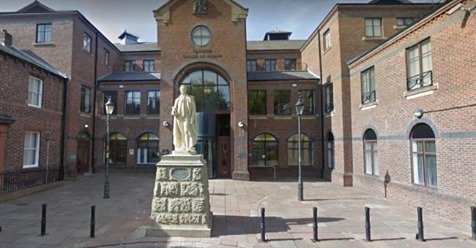 AN EDEN Valley man ‘violently and deliberately’ coughed into the face of a police officer during lockdown after saying ‘Covid-19, yeah’.

Cumbria police took up the pursuit of Ralph Brook after his Volkswagen Passat failed to stop for officers as he headed home to Swindale Cottage in Brough.

In the early hours of May 1, officers went to Brook’s house. Here, the defendant was uncooperative and became ‘extremely volatile’ as PC Iain Parsons produced his taser device as a precaution.

Brook, 46, was escorted outside and said ‘Covid-19 yeah’. “He turned his upper body and face towards the officer,” prosecutor Karen Brooks told Carlisle Crown Court, then ‘coughed violently and deliberately into the face of the officer.’

When interviewed, Brook revealed his mother was very ill in hospital with coronavirus.

He admitted assaulting an emergency worker. He also admitted to four shoplifting crimes and driving twice while disqualified and without insurance, all of his offences being committed in breach of a suspended jail term imposed by a judge last year for rogue-trading fraud.

The shop thefts occurred at Penrith’s Booths and Sainsbury’s stores late last year. On the last occasion, Brook was chased into the town centre by two shop workers. As he emerged from an alley, he said: “If you’d come down here I would have stabbed you.”

Richard English, defending, said of the PC assault: “He makes no excuse. He shouldn’t have done it.”

Recorder Anna Vigars QC heard Brook was the sole carer for two children, had otherwise made good progress under the 2019 court order, and spent 72 days remanded in custody. She considered sentencing guidance handed down amid the current pandemic.

A 28-week jail term was suspended for a year. Brook must complete 120 hours’ unpaid work, a four-month night-time curfew and is banned from driving for 18 months.

Recorder Vigars concluded that to activate the suspended sentence would be ‘unjust’.

She acknowledged the ill health of Brook’s mother.

“But knowing what you knew, personally, about how serious coronavirus is, the idea that you thought it sensible to cough in the face of a police officer and say anything about Covid-19 is extraordinary,” she told him.

“You above all of us know how dangerous the illness is.”

Of the police officers, she said: “They were entitled to carry out their job without the risk of a life-threatening illness being accentuated or elevated or increased by somebody doing something as deliberate as coughing in their faces.”

Carlisle and the surrounding area continues to struggle, as do parts of Barrow,Wigton and Whitehaven Lancs Live – Cumbria …

Residents have been reassured that they will have their say on plans to introduce a 20mph speed limit across all of Kendal’s roads. The Westmorland Gazette | News …