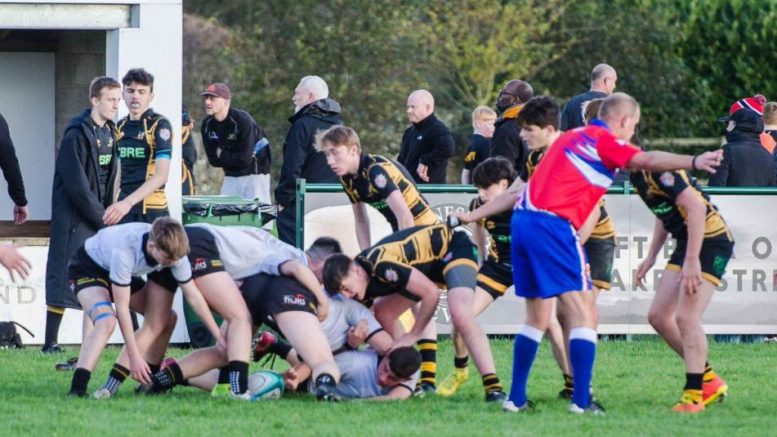 KENDAL took on St Benedict in the Cumbria U16 semi-finals held at Mint Bridge.

In what was only the under 16’s second game of the season, the first being the earlier round of the Cumbria cup in which they beat Upper Eden, the squad welcomed defending Cumbria Cup champions St Benedict’s to the club for this year’s competition semi-final.

The game kicked off and right from the outset there was going to be no quarter given from either side. Big ball carries met with shuddering defence. 2 very evenly matched sides. 7 minutes in and “Bennies” found some good quick ball and ran some good lines in the backs to create space for the opening try.

Conversion was missed 0-5 St Benedict’s. To Kendal’s credit they came straight back into the game. Forwards making inroads, Harley, and Will to the fore. Great work at the breakdown securing good quick ball led to Harley picking and driving left and having the power to take the defender with him. Riley kicked the conversion. 7-5 Kendal.

The dog fight for territory began again with neither side backing down. Kendal was awarded a penalty just inside the Bennies 10-meter line.

Riley’s attempt was guys agonisingly short. Still 7-5 at half time. Idris came on for Reuben at 9, Aston on for Chris.
Good pressure from Kendal to a rushed kick out of defence for Bennies. Riley secured the ball and set off on a mazy run beating multiple defenders, cool and calm enough to come round under the posts. Converting his own try. Kendal 14- St Benedict’s 5.
From the restart Kendal decided to try and run their way out rather than clear. This led to a turnover and St Benedict’s moved the ball left again and scored a well worked try. Conversion kicked. 14-12 to kendal.

An even period of the match now with both sides wanting to get the upper hand. Great line out works from Frank and Conor, big efforts in the scrum from Chris, Thomas, Evan. Every time Bennies tried to get something going, they were met with fierce defence, Zak, Drew, Cam all making excellent tackles. Special mention for Isaac who was making his debut for the side made some excellent last-ditch tackles at full back.

After an excellent passage of Kendal play the ball again was in Riley’s hands who went over for the score. Conversion missed. 19-12. With time starting to countdown St Benedict’s had some sustained pressure which led to a try under the posts.

Now 19-19 with a couple of minutes left. Kendal was ferocious in defence leading to a big turnover. A couple of quick phases and Freddie burst through a tackle to see the try line beckoning.

Excellent scramble defence managed to get to Freddie, the ball was recycled but sadly no points. The next time that St Bennies had the ball they kicked the ball to touch. 19-19.

Some confusion as to what happens now, luckily Graeme had put his camera down for a second to check and we were heading to Golden point. 5 minutes each way or whoever scores the first points.

Frank and Will instantly began to channel their inner Joe Marler and had visions of kicking the winning drop goal! Kendal secured the restart and much to their credit decide they wanted to try and run from deep. Bennies did well and held Kendal up. From the resulting scrum the Bennies Number 8 picked and went blind. A strong carry saw him cross the try line, resulting in the game finishing Kendal 19 v 24 St Benedict’s.
A fantastic game of rugby that was very worthy of being the final. A very proud set of coaches, parents clapped both sets of players off the pitch.
Zak was picked as the Kendal man of the match.
Roll on 2 weeks’ time when boys are at home again hosting Upper Eden.