A WOMAN has urged drivers to be careful on residential roads after her family was rocked by the loss of three beloved pets in the space of half a year.

Bryony Karasek and children were left ‘devastated’ after the deaths of cat Sushi, dog Walter and year-old kitten Su-Tart – who was hit on Monday.

The animals were mown down along the A595 at Wall End, near to the family home.

Mrs Karasek, whose husband Rob died from a heart attack eight years ago, said: “My poor kids have lost their father, their grandparents and now their pets.”

She suggested advice about pets might be included in the Highway Code to help prevent similar tragedies.

“He was such a beloved family pet who had such a great character,” she said.

“He meant so much to us.

“He had been a good friend to my mother, who passed away from cancer three years ago.

“Sushi was a feral cat from the Duddon Valley who had lockdown kittens.

“Su-Tart was one of hers.

“The girls doted on them and we spent lots of each day with them.

“It feels like a chunk of my heart has gone.”

The family lives on the road leading to Longlands Caravan Park, off the A595.

Mrs Karasek says large ‘SLOW’ signs on the brow of the hill on the A-road are ‘routinely ignored’.

She has called on drivers to be aware of the dangers of pets around residential roads and stressed that animals and children could be ‘unpredictable’.

Rescue dog Walter, who was around 10 years old when he died, escaped from the family garden through a rusted rail that he had pushed at and broken.

Mrs Karasek said he dashed across the road and was hit by a 20-year-old driver who was speeding.

She said the driver stopped at the scene and that her son Connor, 18, had seen his dashcam footage of the incident.

She said the dashcam footage showed the driver had been travelling at 43mph in a 40mph zone. 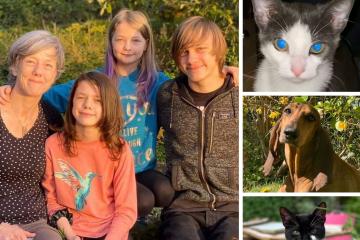