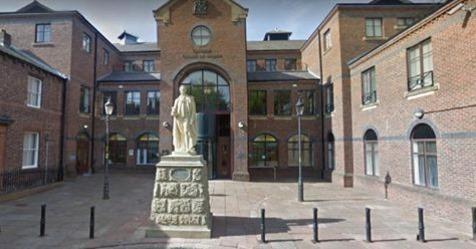 A HOLIDAYMAKER caught with cannabis while travelling to the Lakes for a camping trip was spared prison by a judge who told him to ‘go and sort your life out’.

‪Kenny Christopher Jamieson, 32, fell foul of the law on April 16.

‪“A passenger on a train from Preston to Windermere made a report to British Transport Police about the behaviour of a group of men on the train who were suspected of carrying drugs,” prosecutor Robert Dudley told Carlisle Crown Court.

‪Jamieson was identified by description and searched by an officer at Windermere Station. Nearly an ounce of green herbal cannabis – 26g, worth up to £180 – was found in his bag.

‪“He said it was for his own personal use to be smoked while he was camping,” said Mr Dudley.

‪Jamieson’s subsequent guilty plea to cannabis possession put him in breach of a suspended 10-month prison sentence. That had been imposed at Liverpool Crown Court in September for production of the class B drug.

Jamieson later attended a police station, where he said he lived alone, was ‘bang to rights’ and had handed himself in as a ‘good samaritan’.

He was committed for sentence for the latest offence to Carlisle Crown Court, where his mother made an impassioned plea that he should be spared prison.

“He needs to have more help,” she told Judge Paul Lawton.

“He fell in with the wrong crowd early on.”

He instead extended the original suspended sentence from 18 to 24 months.

The judge also imposed a concurrent two-month prison term for the possession of a drug he described as ‘filthy stuff’.

Judge Lawton outlined the long-term mental health impact of cannabis use and referred to a ‘massive drain on the taxpayer’.

“I’ve dealt with it because organised criminals who know there is a ‘grow’, they come around and rob it.

“They use extreme violence or force to do so.”

The judge warned Jamieson any further offending would lead to prison.

“Go and sort your life out,” he said as the hearing ended, telling the defendant he owed his mother a ‘debt of gratitude’.

“With your first pay packet I suggest you take her out for a pizza and a glass of wine,” said the judge.