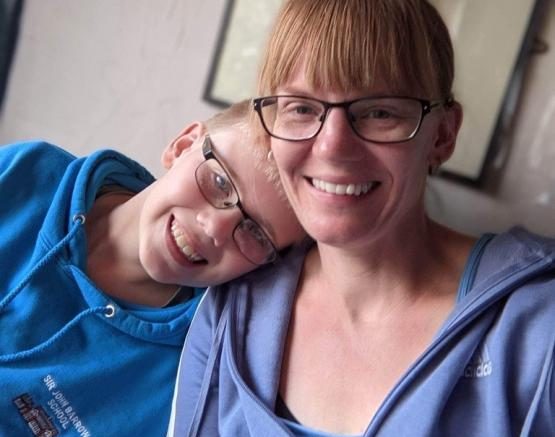 AN ULVERSTON woman will be saying ‘thank you’ to the charity that helped her family cope with the death of her partner by taking on an iconic long-distance walk.

CancerCare supported Katrina Lawson Evans and her children Daniel, 12, and Eva, 7, when her partner, and the children’s father Darryll died following a stomach cancer diagnosis in 2021.

Darryll’s loss left the family devasted so Katrina got in touch with CancerCare’s Barrow Centre after hearing about the charity from a friend.

Eva was referred for art therapy, which involves a specially trained counsellor using art materials and play to gain an insight into a child’s state of mind, while Daniel was offered more traditional talking therapy.

Katrina said: “Eva did lots of arts and crafts which made a massive difference to her. After 14 sessions Eva was in such a good place that she was finally happy enough to say goodbye to her dad. She also brought her artwork home of which we can keep forever.

“Daniel’s sessions mainly involved talking and he worked through a special book each week. He made some wonderful pieces of art including a sand glass, using colours that reminded him of his dad.”

CancerCare has been in Barrow since 2017 and in September 2020 opened a new therapy centre on Duke Street complete with therapy rooms, meeting areas and a specially equipped children’s play therapy room. Since then, demand for its services has risen with therapists helping 417 people from Furness and delivering nearly 3,600 sessions of therapy. This includes 81 children who received special art and play therapy.

Over the last 12 months it has also launched a special peer support group for young people aged 11-17 who take part in organised activities and trips facilitated by youth workers – and Daniel is now a member.

Katrina will be aiming to raise money for CancerCare by taking on the Coniston to Barrow Walk, alongside Daniel in May next year.

“CancerCare relies on public donations to keep going without which it would simply not be there to support families like mine. I am excited to be doing it with Daniel, not only to raise money but also to help spread the word about what an amazing job it does to people who may also be in desperate need of the help it provides,” said Katrina.

Last year more than 60 people took part in the K2B/C2B for CancerCare, raising around £11,000. To take part the 2023 event, register on the K2B website www.keswick2barrow.co.uk/user/register and email your ID number to fundraising@cancercare.org.uk