THE pilot killed in a helicopter crash near the Cumbrian border with the Yorkshire Dales yesterday has been named as Ian Macdonald, from Burton in Lonsdale.

Mr Macdonald was flying his 2016 Guiumbal Cabri G2 helicopter back home from Barrow on a leisure flight when tragedy struck, according to flight data.

Ian’s partner Julia Smith shared an image of him online after the crash, and her mum, Audrey, wrote:

“With great sadness, my daughter Julia’s partner Ian has been killed in a helicopter accident on Monday, June 20 – love from all of us.”

His passenger who was also killed was a 16-year-old German student, called Admarsu, living with local man Andy Ive and his family.

A message that Andy Ive wrote on Facebook read:

“I need to let you all know that Ian Macdonald and the young German student staying with me were both killed in the (helicopter) crash.

“Families have been told. We are devastated.”

The crash happened near Burton in Lonsdale, east of Ingleton, just before midday yesterday (Monday, June 20) and prompted a huge multi-emergency services response to the district. 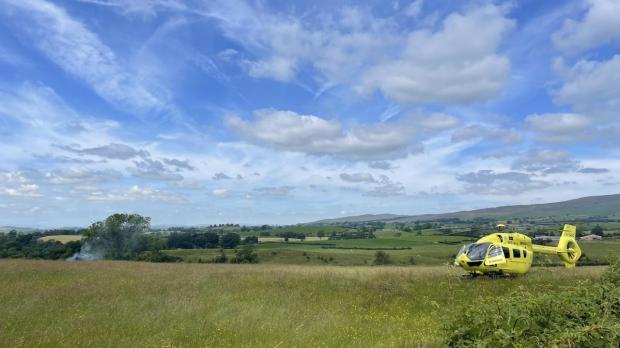 Roads around the crash site remain closed to traffic while police carry out detailed investigations into how the incident happened.

“I have known Ian for around five years and classed him as a friend.

“It is a terrible loss for both families and my condolences go to all of them.

“It is a tragedy which the whole community feels.”

Cllr Peter Thompson, chair of Burton in Lonsdale Parish Council said he was devastated at the news:

“We only learned officially last night who the two were who were killed and it has shocked everyone in this close-knit community,” he said.

“Ian Macdonald was a great support to the village. He had done a lot of work with the village shop.

“Admarsu, who was staying with Andy Ive was such a likeable and popular young man.

“He was just 16 but had been very involved with the Jubilee celebrations.

“He was on my pub quiz team although only had soft drinks due to his age.

“He was very good and very popular. He was an exchange student and had chosen England and Andy Ive to stay with.

“He was just coming to the end of his three-month exchange and was preparing to return home to Berlin soon.

“My condolences go out to both families. We are all in deep shock and this will affect the whole community for a very long time.”

NEWLYWEDS who first met as pupils enjoyed the ‘best day of their lives’ after tying the knot in front of their nearest and dearest. The Westmorland Gazette | News …