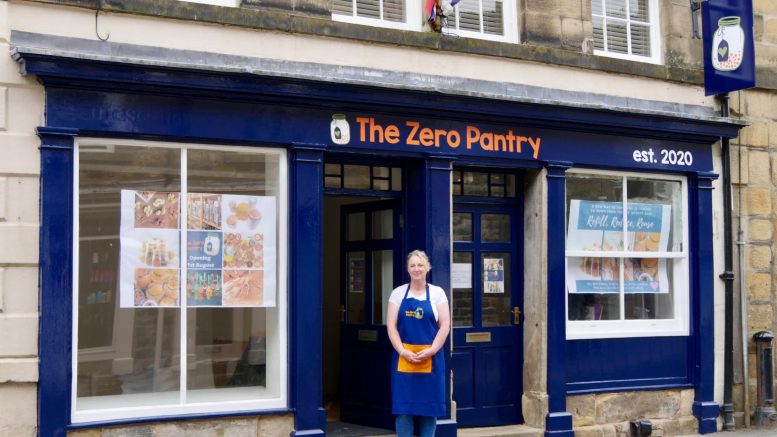 THE latest in a string of zero-waste shops in South Lakeland has opened as the district becomes increasingly eco-conscious.

The Zero Pantry in Kirkby Lonsdale, which welcomed customers for the first time on Saturday, sells foodstuffs such as pasta and cereal as well as eco-friendly cleaning products. Customers fill up reusable containers with their chosen items.

“I have tried to source as locally as I can to keep the carbon footprint down,” said owner Kim Bradshaw, 50, who felt the coronavirus lockdown had impacted the public’s shopping habits for the better.

“I think people are thinking of shopping locally a lot more and supporting local businesses.

“We have gone away from the big supermarkets.

“We have kind of been forced to.”

It has been suggested by some that this move to shopping local was triggered in part by the empty shelves in supermarkets at the beginning of the pandemic and a concern about the health risks posed by busier shops.

Mrs Bradshaw, who also works at Queen Elizabeth School as a community sports coordinator, said the response to The Zero Pantry had been ‘really positive’.

“Everybody’s kind of jumping on board and liking the idea of it,” she said.

“We have a lot of people who live on their own or are elderly and don’t want vast amounts of stuff.”

The store on Main Street is the latest in a string of zero-waste shops to open in the South Lakeland area, as business-owners and residents of the district look to minimise their carbon footprints.

Other establishments include Another Weigh in Kendal, Cut the Wrap! in Ulverston and Root’s Refill Pantry in Bowness.

Mrs Bradshaw said the ‘turning point’ for her came when she watched a BBC documentary about cotton and the waste produced by the clothing industry.

“From that point I stopped buying new clothes.

“I haven’t bought any new clothes for three years now,” she said.

“Don’t feel like you have got to do everything at once.

“Just do little changes and, if we all do it together, we’ll make a big difference.”

Customers at The Zero Pantry currently need to bring their own containers, which are weighed before being filled, but Mrs Bradshaw said the shop would be selling them in the future.

A Cumbrian couple forced to cancel their wedding twice due to coronavirus are among hundreds to have had their big day in the county disrupted by the pandemic. The Westmorland Gazette | News …

Carlisle and the surrounding area continues to struggle, as do parts of Barrow,Wigton and Whitehaven Lancs Live – Cumbria …

Residents have been reassured that they will have their say on plans to introduce a 20mph speed limit across all of Kendal’s roads. The Westmorland Gazette | News …